Spending the Night in a Lightning Storm

The wind seems to have turned during the past few hours.  For now at least I am sitting in the cabin with a thunderstorm outside being blown the right way.  Hope it now holds!  Feels really good after working so hard the last few days.

FAST FORWARD ABOUT 90 MINS LATER – that was storm driven. Now that the storm is overhead I’m going in all directions. Just spun 360 degrees. Heavy rain and lightning at the moment so will just go with it for now..

Something else, which is awesome, is that the stereo came on and seems to be working!  The stereo system stopped working on about day 5 when I had to fiddle with wiring in the temporary solar panel.  I assumed I must have shorted something and fried it.  I’ve tried loads of times since then to get it to come on but largely gave up and have been just using headphones (real pain as they fall out, always in the way etc).  Well, tonight the stereo decided to work when I tried – so I am sitting in the Atlantic, in the middle of a lightning storm, blaring Shosholoza and singing along at the top of my voice.  Crazy stuff as just about everything else is patched together and getting harder and harder to keep working (such as my jet boil stove that yesterday finally succumbed to terminal corrosion). I have a spare though so it’s ok. 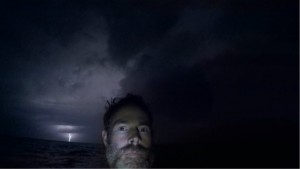